Pumpkins Around the World 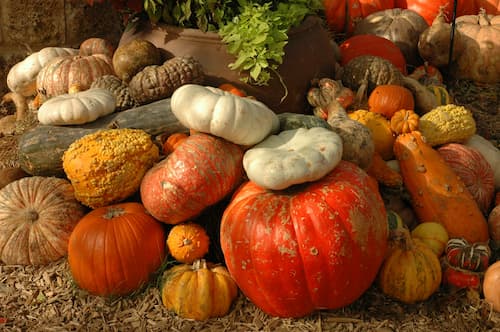 Pumpkins are grown almost everywhere. You’ll find pumpkins around the world on six of seven continents. As a matter of fact, we’ve heard from pumpkin growers all over the world. except for Antarctica. Also, they are grown i a variety of conditions

Listed below are descriptions of pumpkin growing and how pumpkins are used in countries all over the world. The writing is often taken directly from writers to this site with little or no editing. Names are supplied in some cases with permission of the author. Also, if you are from a country not included below, or want to add to the contributions already posted, please contact us with information on pumpkins in your country.

Pumpkins Around the World - Australia

I know in the U.S., you eat pumpkin mainly as a dessert. However, over here, it is a main course meal, very rarely used in sweets. Roast Pumpkin is the absolute favorite of most Australians. When roasting a piece of lamb, beef, turkey, chicken, etc., place a piece of skinned pumpkin in the meat juices with the potatoes, carrot, etc. There is nothing better in the world than roast butternut pumpkin.

Pumpkins Around the World - Belgium

In Belgium (the part of Flanders) people speak Dutch, that’s the same language people speak in the Netherlands.

What do people do with pumpkins in Belgium? Most people use them simply for decoration purposes. There are also a few venues (like the cities of Kasterlee and Duisburg) where weight contests are organised and were people try to grow the biggest pumpkin (mostly types like Atlantic Giant) I’m mainly specialised in growing different types of pumpkins, squashes and gourds, this year I planted around 90 different types ( also French, Australian, Hungarian, … types).

About the Halloween celebration, this is not a wide-spread tradition in Belgium. Over the past years I see that some people decorate pumpkins around these period (mostly inspired by the celebrations in Irish pubs) , but it not like in the US.

In the north China the people don’t like to eat pumpkin, the people of the south China like it. In Canton, dishes always use it to make congee, soup and some dishes. The pumpkin seed can be baked to eat. In Shandong province have a factory to made pumpkin flour that sale to Japan.

Most Chinese pumpkin recipes are for serving like a vegetable. There are dessert recipes, but not too many.

It is also used in medicine: Dispel the pathogenic wind to relieve pain, detoxify

Compliments of Wendy in Australia

Pumpkins Around the World - England

As for traditions and use of Pumpkins here in the UK Halloween is just starting to take off and is receiving more publicity every year. We follow the same lines as those in the US but on a MUCH SMALLER scale. We have trick or treat and the supermarkets sell small Pumpkins for carving with a carving kit and stencils included. Some Pubs and Restaurants may have Halloween Parties and I usually supply a local Pub/Restaurant with a 2-3 Hundred Pound Pumpkin or Squash for a Guess The Weight Money raiser.

We do not have the massive Pumpkin Fests or Fairs that you guys have in the States and Canada which is something that I have tried looking in to but with no response from the organisers of such events. I do not think that we have anything unique about Pumpkins or their use here other than I wish that we could grow them as BIG as you guys over in the States and Canada. MIKE TURNER, Village of Meriden, ENGLAND The Village is situated between Coventry and Birmingham but is situated closest to Coventry Town centre.

In Germany, growing pumpkins has a long (but nowadays nearly forgotten) tradition. Traditionally, pumpkins were consumed as soup or as compote (pumpkin pieces with vinegar, cinnamon, and sugar). But pumpkins – together with the more important turnips – always were poor man’s food and gained popularity especially in years of hunger (during wars, etc.)

Today, pumpkins are a (less important) part of the German good home cooking. Some garden plot holders like to grow pumpkins on their compost heaps. In some regions of Germany, growing pumpkins has real commercial importance. In fall, you will find here pumpkin auctions, competitions, and exhibitions in which presenting a broad variety of different fruit shapes and colours is more important than showing (Atlantic) Giants (mainly for the reason that we can’t grow the REAL BIG ones here in Europe).

Small funny shaped pumpkins are used for decorative purpose: In late September and early October the pumpkins are placed on dishes or in baskets together with corn cobs, autumnal fruit and sheafs of grain.

A few years ago, Halloween was a completely unknown tradition here in Germany, but it gains popularity every year. So many children love to carve pumpkins and the older kids go to Halloween costume parties.

We’re not sure how common pumpkin growing is in Iraq. But, American soldiers stationed there have successfully grown and planted them. See an article with pictures of Pumpkins in Iraq.

Pumpkins Around the World - Mexico

We don’t see the same kind of pumpkins we’re used to down here. They do grow various kinds of squash, and the zucchini blossom is used a lot in cooking, but Linus would be mighty disappointed in Oaxaca.

Halloween is “celebrated”, but mostly by kids who dress up in K-Mart type costumes and beg for money in the Zocalo. Most folks down here think of it as a very disappointing leakage of gringo culture into the local scene. – – Stan

Mexico celebrates a similar, yet different tradition. it is called “The Day of the Dead” as they honor their ancestors. Here is a couple of neat sites about this holiday:

Pumpkins in The Netherlands

There are no traditions about pumpkins in the Netherlands and they do not celebrate Halloween.

“We do celebrate Halloween but only just. The occasion has spread over the last three to five years and I do see some groups ‘trick or treating’ and I live in a conservative rural area.” John S.

“In New Zealand we eat pumpkins mostly as a main course meal like in Australia, and trick or treating isn’t really a big thing over here so pumpkins are not really used for the joy of carving Jack o Lanterns but just to eat. We also eat them boiled, made into pie, as a soup or just roasted and they r mainly only available around the seasons of Autumn and Winter.”  Don S.

Pumpkins aren’t that common over here as a garden product, but we can occasionally buy them at the open market. The seeds that they sell here are for very medium sized pumpkins (10-15 lbs.). They use them for soups mainly, and many people have never even eaten cakes or pies made out of pumpkin. They eat the seeds as a snack. (I’m an American living in Poland.) I like to grow pumpkins in my garden and had someone bring me some “Big Max” pumpkin seeds from the states so I could try to grow “a big one”. I cooked and froze the pumpkin so I could make what I wanted later from it.

They do not have Halloween here as November 1 is a big holiday, All Saint’s Day. Indeed, many people know what happens on Halloween in the states but they do not celebrate it here, at all.

My name is Hazel, and I live on the north east coast of Scotland in a city called Aberdeen, right next to the north sea. My husband is  American and I am a good old scot. We used to live in Houston, and it was there that I fell in love with pumpkins when I went to a pumpkin festival with my two girls to pick out our beautiful orange orbs for Halloween.

We returned to Scotland where we now live in the gardeners cottage on an ancient estate. I decided that this was the year to take on pumpkins.

Everyone laughed, thought I was crazy. Nobody grows pumpkins in Scotland, especially not in the north east. So, onto the internet I went, and your website was the first, and in the end, the only website I have read and read, and re-read religiously.

Things run late here in the gardening calendar. The old voices of wisdom tell you never to plant out before the end of the first week in June. So by that time, my pumpkin plants were getting rather large. I underestimated their enthusiasm. People would walk in my house and shout what is that???? I would tell them “Pumpkins!” and they would shake their heads, “ok hazel” was usually the reply.

Well, planted out and fertilized by a local farmers special brew, instructions from your web site followed as best as my little brain can understand, I now have PUMPKINS!!!!!. I am so excited, and absolutely obsessed. I am up and out first thing. My girls have their own ones picked out. And my friends and family are all gobsmacked at what I have achieved so far.

After that, I decided that this year, due to my novice status, I would just grow them and see what happens, not for size. Surprisingly, I have four plants, three ‘hundredweight’ and one “Halloween’, and with that I have nine pumpkins. Three on two of them, two on one, and one on the Halloween plant. But, I am not sure if this is too much pumpkins to have on one vine? I am also nervous of it being too damp here. We have had a glorious, record breaking summer, which I am sure has helped, but by the end of august,

it could start raining a lot, should I be worried? I have a net over the top of the patch, as the birds have been a bit interested.

Thank you so much for all your advice, it is invaluable. At the moment, my biggest pumpkin is about eighteen inches around, I’m so scared they stop growing! Anyway, sorry this has been a long email, I have wanted to say thank you for a long time, and my husband said to me “go and do it” so here I am, thank you!

Hope you win this years biggest pumpkin, you deserve it.

First of all, our traditions aren’t much different as in USA. We use pumpkin for pie, soup, salad and for “gnocchi” (I haven’t found the translation in English). “Gnocchi” are a small ball of pumpkin and flour, cooked in the boiled water. Furthermore we have a chocolate with pumpkin seed and in the nord of the Switzerland we have different meat products with pumpkin seed. We make the oil for salad with pumpkin seed too.

As in USA, we carving the pumpkins for Halloween and we introduce a little candle in the middle of it. For giant pumpkin, we don’t have much grower and weight off. The Swiss record of giant pumpkin is 268 kg (591 pd.). Source: Gianluca

Pumpkins in Other Languages

Please Support Our Site. Shop for: